Letting the Cat out of the bag

Ailbhe Goodbody joined the Caterpillar Mining team in Las Vegas, US, for a pre-show briefing in advance of MINExpo 2016 and learned about its recent developments and its new and upcoming products 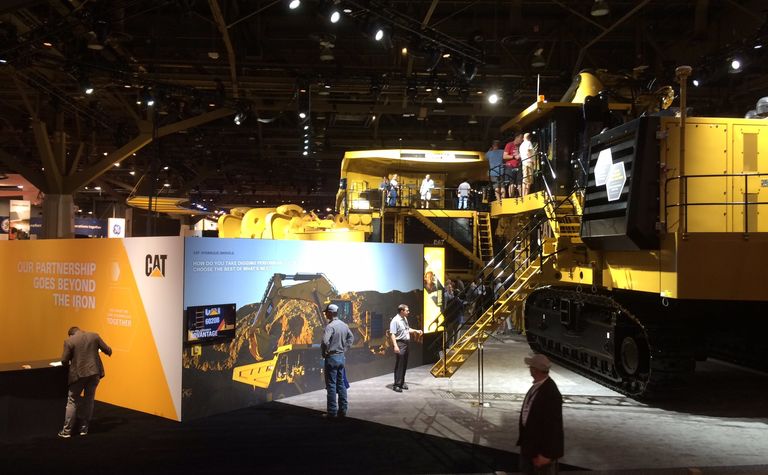 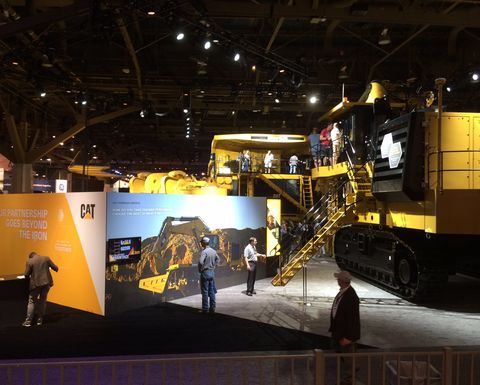 The Caterpillar booth at MINExpo 2016

Tony Johnson, marketing manager at Caterpillar, opened the company’s pre-show briefing by stating: “Caterpillar is really connected to the time and place where the industry is. We have the best technology presence [at MINExpo] in the history of our company.”

It was clear that he was right in this assessment – despite the significant downturn since the last MINExpo four years ago, Caterpillar has made huge investments across its equipment portfolios, although its strategy has included divestments and facility closures.

Denise Johnson, group president, resource industries at Caterpillar and chair of MINExpo 2016, reflected on whether the mining industry had hit the bottom of this current downturn’s cycle – she noted that there were some optimistic signs out there, which she terms ‘green shoots’, but that from a sales perspective there had been no big movement so far.

Johnson noted that Caterpillar outpaces its competitors in terms of the percentage of dollars it invests into R&D. In addition, the company spends the largest percentage of its R&D investment on digital technology, across all of its product lines. It also sees a lot of opportunity in aftermarket sales and support.

She also addressed Caterpillar’s recent exit from some of its product lines, such as room and pillar and track drills. She said that the company aims to focus its R&D spend on the areas that are most relevant, explaining: “We’re much more competitively positioned in longwall anyway [compared to room and pillar]. We’re continuing to support the aftermarket, parts etc for legacy equipment.”

She also noted that when that part of Caterpillar’s business is sold, the company will then figure out who will deal with the aftermarket.

Doug Hoerr, vice president, material handling and underground at Caterpillar, added that mining is a cyclical business, so the company decided to pull back from the room and pillar and track drills; instead it is looking to advance in the hard rock area. He commented: “These were tough decisions, but we feel confident about our resource allocation. Within Caterpillar we looked up and down the portfolio for the greatest opportunities for R&D. Longwall is a more efficient way to extract soft rock and coal [than room and pillar] and is a better use of our R&D dollars.”

A big focus for Caterpillar at this year’s MINExpo was technology. One of its new releases was the announcement of the new Cat proximity awareness system as part of the MineStar Detect capability set, which features advanced peer-to-peer communications for collision avoidance without a site-wide network.

Also as part of MineStar Detect, the company announced the availability of object detection systems for all brands of mobile surface mining equipment, meaning that previously unsupported Cat machines as well as other brands of machines can now be equipped with the cameras, radars and in-cab displays that deliver increased site awareness to mobile equipment operators.

Other areas of MineStar that have been updated include Cat MineStar Terrain, which now has new features that can optimise mining productivity and operating costs.

"What we're doing with autonomy is becoming the broadest such portfolio in the mining industry," said Jim Hawkins, director of mining technology enabled solutions at Caterpillar. “A lot of companies are using this technology – the mining industry was an early adopter [of automation] and it has evolved with the industry.” 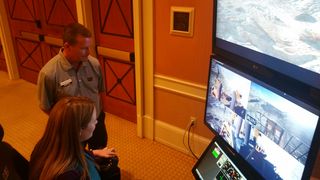 According to Hawkins, Caterpillar first mentioned autonomous trucks at MINExpo 1996 but didn’t implement them until the solution was adopted by Fortescue Metals Group (FMG) in 2012. The fleet at FMG’s Solomon Hub in Western Australia has expanded to 47 Cat 793F Command for Hauling trucks – by July this year, the fleet had hauled over 200Mt safely since 2012 and had reportedly increased productivity by 20% over a regular truck fleet. The fleet now handles more than 70% of production haulage at Solomon.

Hawkins said: “Data science on its own doesn’t create value for the customer.” However, Caterpillar’s position as an OEM allows it to integrate technology into its machines really well, meaning it has the ability to predict what the machine is doing and design it for optimum efficiency.

The company also plans to expand autonomy across its other product lines, such as drills. Along with semi and fully autonomous drills, some of Caterpillar’s new mining technology offerings that will be launched shortly include Terrain Grading (blade control), Truck Spotting, Load Positioning, Fleet Lite, Generic Object Detection, Proximity Awareness P2P and Cat Asset Advisor. In addition, the future of the Cat MineStar Fleet capability is to put it in the Cloud and make it available on handheld devices.

Just prior to MINExpo, Caterpillar sponsored a hackathon with the aim of creating innovative solutions for boosting mining equipment operator performance.

Caterpillar had a strong surface equipment range on display at MINExpo 2016. Its newest large mining truck, the 794 AC, made its mining show debut there. The 291t capacity truck uses a combination of proven designs – a chassis design that has accumulated about 18 million operating hours and power train design that has racked up three million hours.

“Customers make more money with our trucks compared to anyone else,” said Sudhanshu Singh product manager, large mining trucks, at Caterpillar’s pre-MINExpo event. “After the Bucyrus acquisition [in 2011], we looked for ways to expand our range… We always look for ways to lower costs for our customers.”

The 794 AC has over 1.8 million proven chassis hours, over 3 million hours drivetrain experience, with some components clocking over 45,000 hours. There have already been over 80,000 cumulative 794 AC hours with the highest truck running over 22,000 hours.

It also has high physical fleet availabilities – Singh noted that customers expect these trucks to run 24 hours a day, seven days a week, 365 days a year – and so far it has had positive feedback from customers in terms of performance, reliability and serviceability.

Singh said: “The serviceability of this truck is something that customers love; for example, we have eliminated the decks.”

Also announced at the show, Caterpillar has a new control system for its 7495 Series of rope shovels. The Operator Assist – Enhanced Motion Control system is now standard on new 7495 Series shovels and available for certain Cat 7495 and Bucyrus 495 shovels in service the new software is designed to simplify machine operation, allowing the shovel to be operated in a manner that both promotes high production and protects the machine from inadvertent misuse.

Another product displayed at Caterpillar’s MINExpo booth, its Cat LatchFree Dipper System, is according to the company the first successful solution to the most common cause of rope shovel downtime. The system replaces the standard maintenance-intensive latch assembly with a durable steel link assembly mounted to the dipper back.

A multi-million investment in a new gear milling plant in Caterpillar’s Milwaukee shovel and dragline factory is already being used to cut gears for customers.

Harms said: “Despite the mining industry downturn we are still investing to improve our customer service capability, and to make our operations more efficient.”

Caterpillar also had its new Cat MD6420C rotary blasthole drill, which is the first in its new C Series, on display at MINExpo. Designed for hard- and soft-rock applications, it is suitable for high-volume production. Larry Tate, product director, material handling, said that its life cycle is 25% greater than competitor models; it also has autonomous capability and a genuine Cat undercarriage.

Droogleever added: “We have had to close a lot of facilities and consolidate them in the last few years, but I think we now have a really good manufacturing strategy.” The company also emphasised that it ensures that the quality of its products are the same no matter where they are manufactured.

The company has developed a new high torque drive system for longwall AFCs; the Cat HTD4100 enables a higher level of automation for enhanced speed and torque control and real-time monitoring, and its modular design simplifies installation and maintenance. A pilot is expected to be available in the June 2017 quarter. It displayed this on the MINExpo show floor, along with two new roof supports and one refurbished roof support.

The company also announced the development of the new Cat R1700K underground loader, the first of the K Series machines, which has been redesigned from the ground up with scalable technology. According to Steve Rich, ‎general manager and product manager, underground hard rock vehicles: “Caterpillar has put some pretty strategic investments in place for this product line.”

The R1700K delivers a payload of 15t, 20% more than the previous model, and supports efficient three-pass loading of the 45t-capacity Cat AD45B underground truck. After rigorous field testing is completed in 2017, the R1700K will be commercially launched in 2018.

Caterpillar is also looking into battery solutions for LHDs. Droogleever explained that it is still on the development path, but added that the electrification of LHDs is very important.

Additionally, Caterpillar is adding the new AD22 underground truck to its hard rock mining product line. The 22t-payload articulated dump truck is the smallest in the Cat product line, yet it is designed to deliver the productive performance and durability of its larger counterparts.

Also showcased at MINExpo was the Cat Rock Straight system, commercially launched in August, which mines hard-rock minerals with longwall efficiency. It uses Cat Activated Undercutting Technology, which attacks the tensile strength of the rock using percussion. It produces very little heat at the cutting tip, resulting in a long wear life for the picks; it also produces sized material which simplifies processing. Jan Rohwer, product manager, hard rock cutting, explained that the Rock Straight system doesn’t have the disadvantages of drill and blast, and that it has significant benefits regarding production cost and dilution.

Company's misting system a solution to sponcom from LHDs

Deswik positions itself for growth