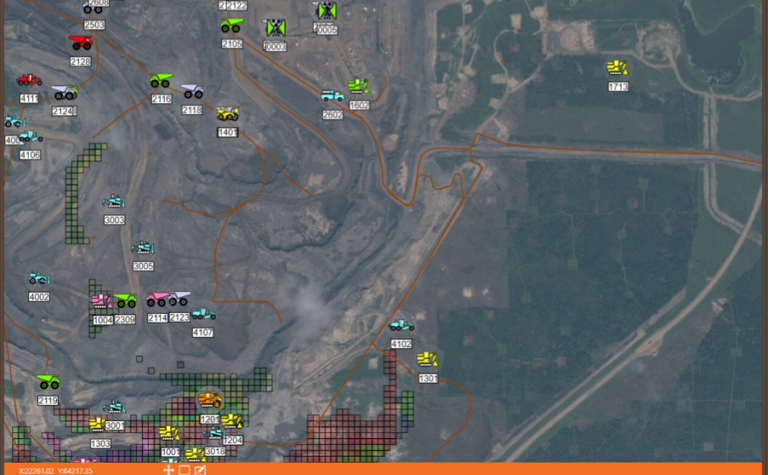 The biggest update in System 6 is the total overhaul of Wenco’s most popular applications for mine monitoring and administration — Fleet Control and MineVision.

These drag-and-drop tools make it easier for mines to command the activity of their fleet. Fleet Control allows mine dispatchers to view schematics of progress as trucks move through their haul cycles, while MineVision serves as a real-time map, highlighting equipment position and activity. Dispatchers can use these applications in tandem to set assignments, adjust routes, and otherwise control their operations.

In System 6, these applications have been merged into one. Now, schematic views and maps sit side-by-side, giving dispatchers a more seamless experience that allows for greater flexibility in mine management.

Fleet Control now uses a set of tabbed windows, similar to common software such as Adobe Photoshop. Dispatchers can open multiple views at the same time, resizing each window as they like. There’s no need to switch back and forth between a shovel-dump view and a real-time map. All schematics, maps, equipment lists, and even some reports live in the same workspace. Mines are free to configure a fully customised picture of current activity and mine details.

With the new Fleet Control, dispatchers can even open several windows of the same view, setting each at its own zoom level. In this way, dispatchers can keep close eyes on particular equipment or locations while also maintaining a full view of the mine.

Wenco stated that it is a 'new approach to fleet management, one focused on the way mines really work, and that the range of functions now available to dispatchers give them the freedom to run their mines however works best for their operation.

Beyond integrating maps into Fleet Control, System 6 also advances the graphics and mapping capabilities of Wenco technology as a whole.

System 6 draws on a custom-built graphics engine that greatly enhances all visual data used in Wencomine. Maps now load in rich topographic detail that dispatchers can easily explore through simple dragging and scrolling. The new engine also supports multiple map functions, so dispatchers can keep several windows of maps open at once without noticing a drop in performance.

Wenco has also renovated the way its mapping system handles mine activity playbacks. Before System 6, playbacks called up a set of historical data points to match any filters applied. Dispatchers could see the GPS points along a truck’s path, all the locations that trucks dumped a particular material, any spots that a certain OEM event occurred, and more. Although it proved useful, Wenco thought that it could be even stronger.

Now, playbacks have been totally redesigned with clarity in mind. From the mapping window, dispatchers can now select a timeframe for a playback, press play, and watch activity unfold as if it were happening all over again. Rewind and fast-forward functions let them scrub through the timeline until they reach a critical moment. Then, dispatchers can pause the playback to examine that moment’s detail more closely.

In addition, Dynamic Dispatch has a new configuration screen. The old-style grid is gone, replaced with icons that clearly show relationships among shovels, dumps, and haul trucks within the dispatch groups. There’s no more need to fill in fields and calculate a dispatch schedule. Dispatchers can simply drag trucks from one group to another, while sidebars show details such as Loading Unit Projections, Dump Targets, and other KPIs. Just like the other views in Fleet Control, Dispatch Configuration now appears as another tabbed window. As a result, mines never need to take their eyes off production to adjust dispatching parameters - it all happens together.

Along with these features, there are several other upgrades to System 6 - from Mobile Dashboards to simplified license management to an Electronic Logbook that adds depth of the pre-start checklist, Wenco stated that System 6 has the potential to boost mine performance to greater heights than ever before.