Austmine announced the winners of its biennial mining industry awards last week at a dinner in Perth, Australia 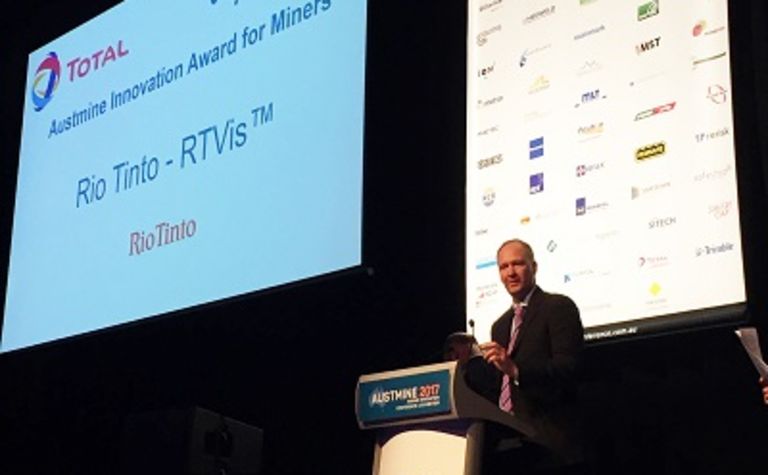 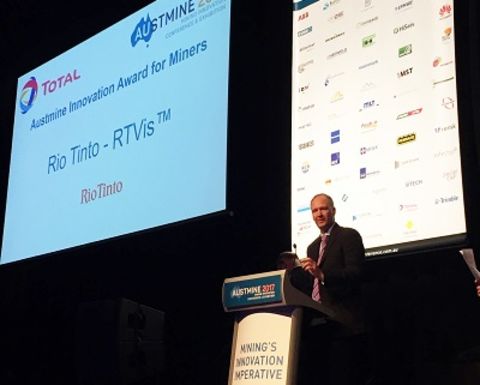 Part of the Austmine 2017 event, the awards celebrate METS and mining companies that have truly embraced innovation or have had considerable export success.

The big winner of the night was Rio Tinto which took home the Austmine Innovation Award for Miners, sponsored by Total Oil Australia. This was just the second time that this award has been given and Austmine said the calibre of entrants, which included Rio Tinto, PanAust, the New Hope Group and RUC Cementation Mining, was exceptionally high.

The award was given for Rio Tinto’s RTVis system, with Ben Rogers, manager for mining innovation and analytics delivery, accepting the trophy. In 2007, Rio Tinto established the Rio Tinto Centre for Mine Automation at Sydney University. One of the major outputs from this collaboration was the Mine Automation System (MAS) and its associated internally developed 3-D visualisation tool – RTVis. The tool provides a three-dimensional visualisation front-end for MAS and currently assists over 1,000 users across Rio Tinto to easily compare and evaluate mine information in real time. RTVis enables personnel based locally or in remote facilities to make faster, more informed decisions based on information from multiple sources, fused together to provide a combined view. The system is now deployed in over 95% of Rio Tinto’s open cut mines.

Rio Tinto’s Growth & Innovation group executive, Stephen McIntosh, commended in a press release: “The award recognises the power of better use of data which simply but significantly helps us to make more informed decisions in relation to our mining operations.

“It is our aim to support the business in generating US$5 billion of additional free cash flow from productivity gains by 2021. The innovative use of data, technology and automation is integral and this award signals we’re on the right track.

“We’re now using these technologies at more than 95% of open-cut mines across Rio Tinto, making huge contributions to boost productivity and save costs.”

He added: “This is an exciting time for Rio Tinto, and to have our peers acknowledge us as the industry leader in mining technology and innovation is absolutely tremendous.”

CSA Global scooped the Excellence in Export Award, with managing director, Jeff Elliot accepting it on the company’s behalf. CSA Global is a privately-owned, independent mining consultancy that has been providing specialised consulting services to the international minerals industry, across all mineral commodities, for over 30 years. The company has significantly increased its export earnings by pursuing opportunities in new geographic regions and diversifying its service offerings across the mining value chain.

The third award announced was the Innovation Award for METS, sponsored by the Department of Industry, Innovation and Science. Austmine said this was the most fiercely competed award, with in excess of 30 individual submissions received. After narrowing it down to our five finalists, Core Resources won the prize on the night with its Toowong process. This is a novel leaching technology for cleaning-up mineral concentrates, providing a solution to growing levels of contaminants. It enables the removal of arsenic, antimony, mercury and tin from copper and nickel concentrates and fixes these contaminants in an environmentally stable and manageable form.

Pilot plant trials of the technology have achieved arsenic removal of over 90%+ and antimony removal in excess of 80%+ from copper concentrates, reducing levels to 0.05% arsenic: well below acceptable smelter limits. For companies with high arsenic projects, it may be the difference between the project’s viability and failure. The technology provides economic benefits of avoiding penalty charges and increases social license to operate, having the ability to solve a pressing issue facing the global copper industry, and to dramatically increase global copper resources that can be mined.

The final award was Champion of Innovation. This award was introduced last year to have an individual recognition award for those who consistently contributed to driving innovation in the mining and METS sectors throughout their career.

Bob Muirhead, executive chairman and founder of RCT was the recipient. Austmine said that “Bob has been a true innovator from day one and as a result he has had an illustrious career in the mining industry spanning decades.”

Bob established RCT in 2002 with a range of solutions spanning five brands that are now distributed globally to improve mine production, safety and deliver overall measurable business improvements. Austmine added that on top of all this, Bob has mentored many apprentices; passing on his knowledge, wisdom and way of thinking. The majority of these apprentices are still at RCT today in senior roles. “Bob’s unwavering enthusiasm is both contagious and inspiring to all,” the group said in a press release. “Even today, he is still providing leadership to drive innovation with the R&D team.”

The next award ceremony and conference will take place in May 2019 with the location to be confirmed.

The shortlist for the 2021 Mining Magazine Awards has been announced