Ailbhe Goodbody spoke to Thor Kallestad, chairman and CEO of DataCloud, about its real-time, high-resolution rock mass intelligence and how the company has increased its focus on the mining industry 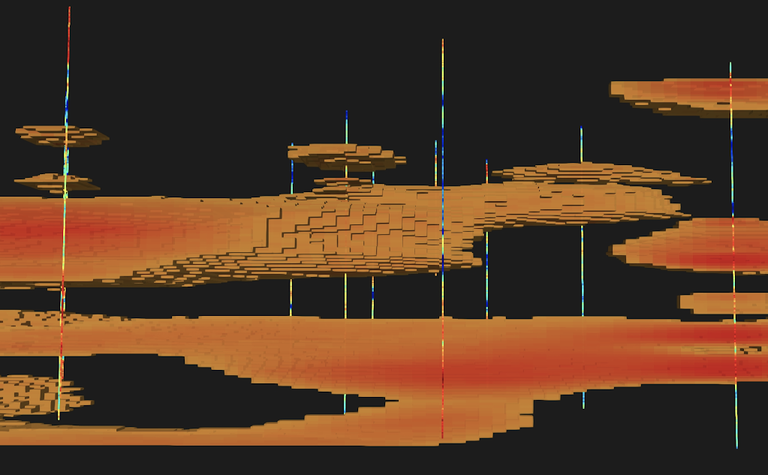 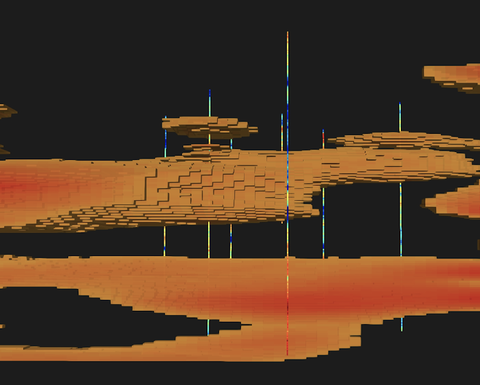 Rhino blasthole data, and the distribution of iron ore within a pattern, as visualised in MinePortal. Waste rock has been removed from the image. Real-time, high-resolution subsurface imaging such as this is simply not possible with legacy measurement while drilling (MWD) techniques

Could you tell me about DataCloud's solutions for the mining industry?

We are a 2-3 year old start-up and our background is in oil and gas. We took the rock knowledge and expertise we had from E&P [exploration and production in the oil & gas industry] and brought it over to mining.

The solution that we developed is essentially an A-Z measurement platform with two real parts to it. We have an Internet of Things (IoT) sensor that we put on production drills, which measures vibration properties in the drill steel and then communicates with an edge device that we put in the drill cab. On that edge device a little bit of math happens, and then the data gets compressed and streamed to the cloud. That part of it, the IoT and the edge solution, is called Rhino, and that mounts on the drills and then gets real-time information from the drills while drilling blastholes.

The second part of this solution is called MinePortal - that's the cloud-hosted part of it, geoscience algorithms that convert that raw IoT information into rock properties for clients. They're able to log into a browser and see a real-time high-resolution image of the orebody, ore/waste contacts and blast critical rock properties from IoT and edge devices on the drill, and then cloud computing algorithms and machine learning with Azure - we're a Microsoft partner company, so we do a lot of this with Microsoft.

Since DataCloud was in oil & gas already, was the mining industry the next logical step?

It is, yeah. In oil and gas, we used to joke that you could be slow and expensive and you'd get away with it - it takes three months to drill an offshore deep-water oil well, and it costs umpteen million dollars to do that.

But mining is about blastholes, they can drill 70 of them in a day in some places in the Pilbara [in Western Australia] where we've worked; so rather than slow and expensive, it's got to be fast and cost effective.

So that's where IoT and cloud computing come in; things that probably weren't possible five years ago just because those technologies didn't exist. We feel we've got a real right place, right time part of our story.

How are the Internet of Things and cloud computing changing what mining companies are able to do?

It's really our core reason for existence. We feel that this is inevitable, that mining companies should have real high-resolution understanding of their orebodies and they've lacked it historically.

We understand why that is - the tempo of mining operations is so fast, and there hadn't been these IoT and edge devices and cloud computing available to build the measurement platform to provide the information at a scale and cost that mining companies would say yes to.

How has DataCloud combined expertise in geosciences and experience in mining with the speed and scale of Silicon Valley?

It is really the fundamental thing that we've brought to the mining industry, it really encompasses our core reason for being here. DataCloud has the geosciences expertise of knowing how to measure rocks, that's well understood from various other industries; the Silicon Valley and the cloud computing part of it allows us to use that knowledge and add speed and scale for it to be acceptable to the industry. 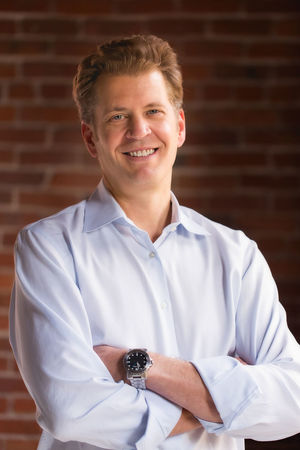 The mining industry has also always known how to do this, but just hasn't been able to tolerate work slowdowns to get the information. This sort of data is very valuable information to mining companies - but with cloud and artificial intelligence (AI) techniques on top of the well-understood physical relationships with the rocks, it's the marriage of those two things that's been very powerful.

Incorporating technologies from other sectors is a great thing for the mining industry. As you know, there is good news and bad news with being the first to move on new technologies. The companies that go first, they inevitably stub their toes and mistakes happen, that's just how it goes. But being later in the game allows the mining industry to learn from the good, the bad, and all the problems that have happened previously in other industries.

Do you have any recent examples of mining companies that have used your solutions at their sites?

We have been working for iron ore and metallurgical coal mines in Canada and Australia. A lot of the data is confidential because we measure such critical properties about the orebodies, which is the most important thing for the value of the reserve, so a lot of companies want us to keep it anonymous and we do honour that.

So DataCloud's reach is global?

Right now, the company is just focused on Australia and Canada. As a start-up we have this focus, and then later this year we're going to raise another large round out of Silicon Valley and use the proceeds to expand into other parts of the world.

Underground mining is one of the areas we'd also like to get to, we're currently just working with open-pit mines. We figured we would start with open-pit mining because it's kind of easier to see what's going on, but now that we understand that we're looking forward to transferring it for underground operations.

I think the biggest takeaway for this whole DataCloud journey of ours is that I feel we've got pretty lucky, and I think luck is a big part of life. It is kind of right place, right time; having a few people from oil & gas backgrounds that were not miners, and then finding out the that mining industry wasn't really doing real-time geoscience during drill & blast operations. It is a lot of luck to stumble into that.

So DataCloud found a niche in the market?

Yes, and then we all looked at that and said oh wow, this is a huge opportunity, we should pivot and focus on this. It was luck there, and then luck on the timing with the IoT and the cloud computing advances. We feel pretty fortunate to have seen this giant opportunity that we think is inevitable that kind of landed right in our wheelhouse.

It has been going well with our first clients and we look forward to having these sensors on every drill in the industry over the next few years.

We'll raise a large amount later in the year, then hire a bunch of people and expand. 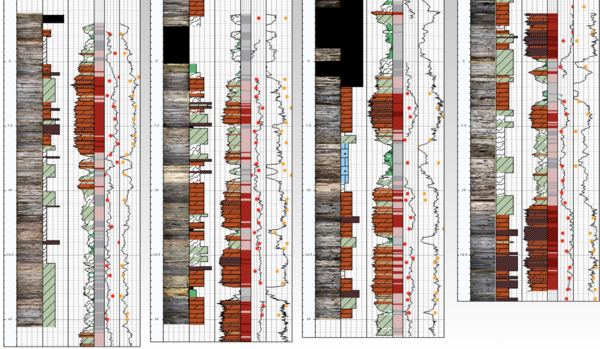 Orica is migrating its applications and services to the cloud