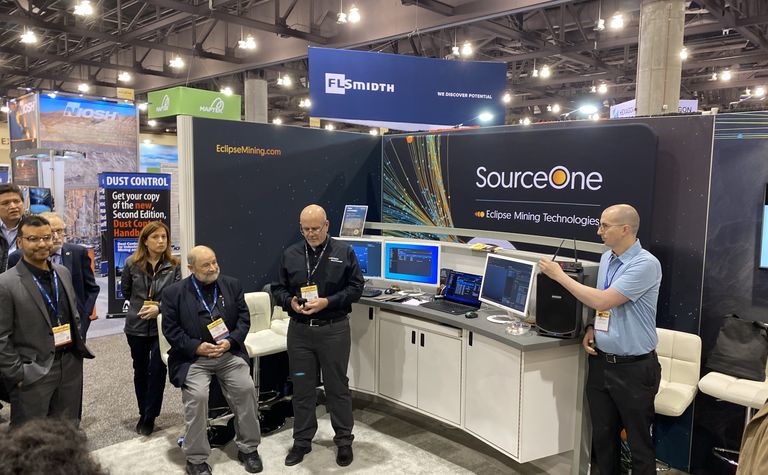 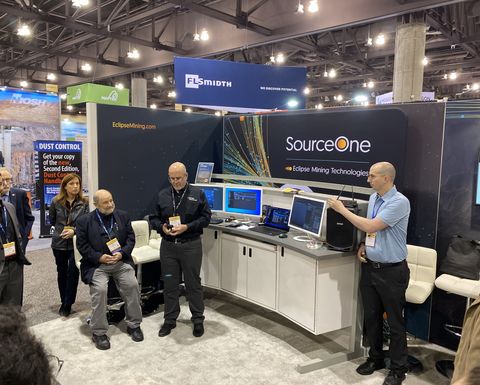 Ailbhe Goodbody in Phoenix, Arizona, US

SourceOne is a data integration and management platform that is Eclipse Mining Technologies' new flagship product. Launched on February 24 at the MineXchange 2020 SME Annual Conference & Expo in Phoenix, Arizona, US, the SourceOne platform is designed to bidirectionally integrate a mining operation's applications, allowing for data fluidity and enabling collaboration.

SourceOne can organise, aggregate and store data along with its context, allowing a mining company to drill down into its data history. The company describes it as the mining industry's first integrative vendor-agnostic platform.

Overall, Susan Wick, CEO of Eclipse Mining Technologies, feels that the launch of SourceOne at the show went well: "We've had nothing but positive comments."

Fred Banfield, chairman of Eclipse Mining Technologies, says: "Most of the people we've talked to recognise the need for it - that's the most significant thing I have taken in from what other people have said [about SourceOne]."

Banfield highlights why interoperability is so important in modern mining technology. "Over the years, people have developed all these applications that do brilliant things, but they don't always share the data," he tells MM. "If they aren't using the right data, the value of the applications are negated."

He says that historically, manually transferring data between different programs has been a time-consuming activity fraught with the possibility of mistakes. With the increased volume of data generated by modern technology, being able to share data between applications is critical.

Banfield points out that if you look at technical reports from mines, many of them are the result of people using up to three or four different pieces of software for their NI 43-101 reports (a codified set of rules and guidelines for reporting and displaying information related to mineral properties that are owned by, or explored by, companies which report these results on stock exchanges within Canada).

"They're transferring the data from one to the other, so that every time they make a data transfer, there's possibility of introducing errors," he notes.

Wick thinks that mines should own their data. "In many cases, vendors can't transfer the data easily," she explains. "But if [the mines] own and can use all their data, the results they get will change. That's something that hasn't always been available historically to the industry."

Banfield founded the mining software company Mintec in 1970 and served as its chairman until it was acquired by Hexagon in 2014. Wick worked for Mintec too, as its chief operating officer.

The rest of the Eclipse team is also well versed in mining and technology, and Wick and Banfield believe this understanding of the industry gives the company an edge. "Our software developers all understand the problem," says Banfield. "They're not just working from somebody's analysis; they understand why they're doing what they're doing, so it makes a big difference."

Many technology companies have moved across into mining from other sectors, such as the automotive or military industries, and may not fully understand the mining industry's unique challenges.

"It's a very special set of data that we're dealing with," comments Wick. "Other industries come in to try to deliver some technology that they think would be useful, but it has to be adapted [to the mining industry]. Without that knowledge, it can be a little challenging.

"I don't think too many groups could have accomplished this task. It is a combination of knowing mining, and knowing technology, and having worked with mines long enough to understand what their needs are and being able to respond to that. If we didn't have those pieces, I'm not sure [SourceOne] would have been the successful tool that it's going to be for the mining industry."

One of the benefits of SourceOne is that it is unlimited by legacy constraints. "When we started writing software originally, we brought out tools and applications, and later on we began to link them together so they would flow logically from one application to another," explains Banfield. "But what happens is these tools are sometimes developed using different data storage methods, different protocols and different interfaces.

"SourceOne is an attempt to go back and start from the beginning to build a structure where all the data is stored so it can be interchanged, tracked and audited, and it has a single interface with consistent rules and behaviour."

Wick gives some simple examples that demonstrate SourceOne's ease of finding historical and contextual data. "If you send a report up to corporate, they can drill down [into the data history] if they have questions about the report," she says. "They don't have to come back to you and say ‘Tell me this, tell me that' - they can just drill down and get the original data, the whole context, and where those answers came from.

"Another example might be if you've got somebody working on a project and something happens to them; that result, the progress and the context is all stored, it didn't go anywhere. If somebody decides to leave a job, a lot of the time some internal knowledge and intelligence leaves with them. This helps the mine preserve some of that."

Banfield adds: "It provides some continuity with the data. Years later, when you go back and look at how something was done because you want to figure out why it did or didn't work out, you can track how things were done and what data was used. It's not lost. This system allows you to store all the data in one big place where everything is indexed, and it has metadata so it can be searched and found."

Another feature of SourceOne is that it can facilitate the future adoption of advanced technologies such as artificial intelligence and machine learning. They are not included in the platform at this point, but there is a possibility they could be down the line.

"Before you can do any of those things you have to have good data," says Banfield. "What we're really trying to do is to provide the data, and to provide it in a way that can be linked to those applications."

Wick comments: "We're preparing the mining industry for being able to make those adoption choices."

She adds that it is important to recognise that the role of technology in mining is constantly changing, with upcoming technologies such as 5G on the horizon.

"[Technology] is a change that mines will want to step into sooner rather than later," she says. "As the amount of data generated grows, the problem becomes much bigger over time. You want to step through it and adopt it in a rational, thoughtful way because change management can be hard."

A vision of fast data