PRESS RELEASE: Moving and processing vast amounts of rock to extract a small percentage of valuable metal is not only environmentally disruptive, but represents over 80% of the total production costs in mining. The industry then sets their cut-off grades according to this cost structure, and is forced into looking for economies of scale. 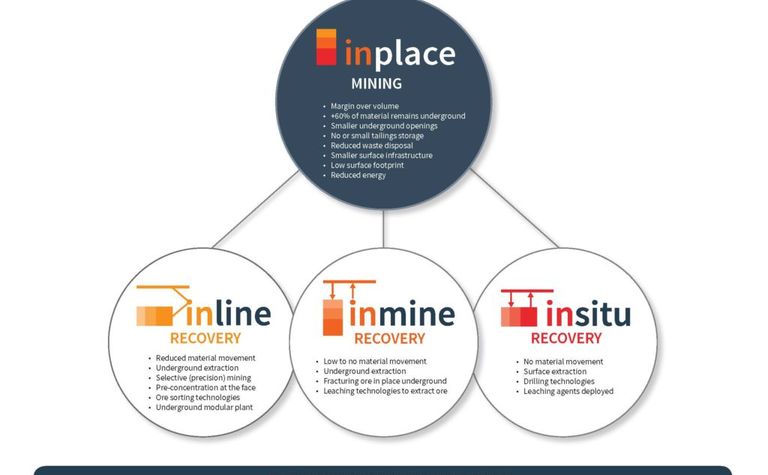 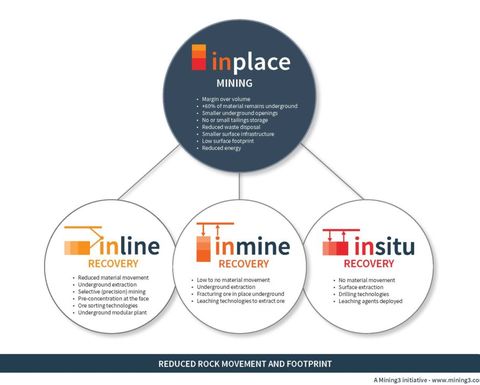 In underground mining, this has led to larger and larger trucks to improve productivity, bigger mine openings and upward trending ground control and ventilation costs. The average Australian underground mine is 5.5m x 5.5m in diameter with many others much larger. It has inadvertently led to increased costs, particularly with higher standards adopted in most mining jurisdictions where nearly all underground openings are now fully supported by mesh or shotcrete.

It creates an interesting nexus. Gangue movement and treatment drives operating costs which in turn increases the treatable grade.

The conventional thinking for mines of today is that processing plant recovery rates of over 90% are required to cover the high costs of mining large quantities of gangue, and milling material that is almost all waste. This thinking is no longer valid. The question we should be asking is what recovery gives us an equivalent or better margin than that obtained based on our conventional approach to mining.

With declining ore grades and the need to mine deeper ore bodies, we need to utilise new methods that reduce rock movement, mine more selectively, and emphasise quality over quantity.

Mining3 is leading a transformational initiative called In Place mining, which is motivated by the concept of minimal rock movement and processing “In Place”. In Place mining will deliver a small surface footprint, reduced tailings generation, high automation, and a low capital intensity mine.

Three methodologies can be deployed, depending on the ore body and mining method: In Line, In Mine or In Situ. Each is an independent solution, but there are cross-disciplinary linkages that connect them. All deliver decreased rock movement, improved quality of extracted material and successfully address the nexus of gangue driving operating costs.

The proposed methodologies are particularly pertinent at depth where mining costs escalate, and human safety becomes unmanageable even at higher grades.

The In Line Recovery (ILR) concept incorporates selective mining and ore upgrading, such that concentrated material is transported to the processing facility. ILR incorporates technologies that can be employed at or close to the face to selectively mine and pre-concentrate material; significantly reducing the material movement to the surface.

There is a host of emerging technologies that enable ILR. Of particular interest is:

The In Mine Recovery (IMR) concept will minimise rock movement and fracture ore using blasting, hydraulic or other means. It generates a conditioned mineral block that can be combined with chemical and/or biological tools to leach valuable ore under unsaturated conditions. CSIRO’s Remote Ore Extraction System (ROESTM) which uses remote automated horizontal drilling and blasting provides a possibility to create an underground leach reactor for massive leachable deposits.

At the very least a hybrid method where high-grade ore is treated more conventionally and low-grade ore is “dump” leached in such underground reactors is attractive in many scenarios. Such low-grade ore has a much lower cut-off grade and hence can sustain lower metallurgical recoveries.

IMR has particular application in the extraction of metal from remnant ore following sub-level or block caving. Such opportunities are rarely considered yet the capital mine development to enable them has already been spent, and the accretive opportunity can be significant. An example is where the last economic lift in a sub-level cave has been taken and a leaching process is established to extract some residual value in the remaining ore. In this scenario, acceptable margins over incremental operating costs can be achieved with low recoveries (potentially over long time horizons) of metal.

Traditional In Situ Leaching (ISL) or In Situ Recovery (ISR) is well known as an established low-cost method for commodity extraction that does not depend on rock movement. The ore is processed in situ. It is used extensively in the Uranium sector and for extraction of water soluble salts (for example Potash) where favourable, generally sedimentary hosted deposits allow it. The economics in such instances are attractive, and mines like the Beverly mine in South Australia operate very successfully. The circumstances do not depend on energy but rather metal recovery where the right geology, geometallurgy and permeability, in particular, are key.

However, for ISR, there are of course noted social/environmental barriers and concerns relating to conventional acid and cyanide lixiviants and their potential toxicity issues in ISL. Likewise, fracking is a concern often referenced in debates about ISL.  Many of these concerns will be overcome but remain a challenge in the short to medium term in applying this more broadly to ore deposits.

A key enabler for ISR is the development of new lixiviants. In particular, the Glycine technology developed by the gold technology group at Curtin University is a game changer. It is a non-toxic, non-volatile reagent. When placed in an alkaline environment, it is selective in its ability to leach base and precious metals without taking gangue minerals of iron and manganese into the solution. It is also reusable provided it is kept in a closed system. As it operates in an alkaline environment, there are no corrosion issues such as can be seen with acid systems. The opportunities to use this technology in saturated (ISR) or unsaturated conditions (IMR) represent a very exciting opportunity.

So why should these concepts be considered more closely now? The ideas are not new and, in the case of In Situ Recovery, they have been around for some time. The answer is that there are exciting new advancements in enabling technologies at varying degrees of maturity that, if integrated, will successfully deliver the In Place mining vision.

Mining3 and RMIT team up for blockchain breakthrough