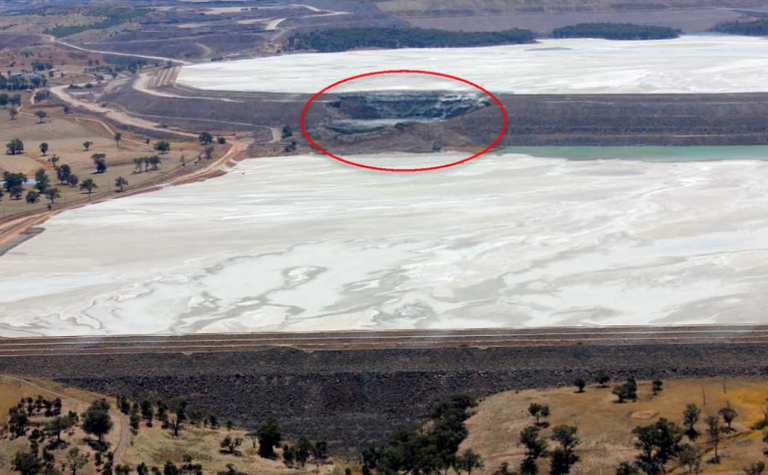 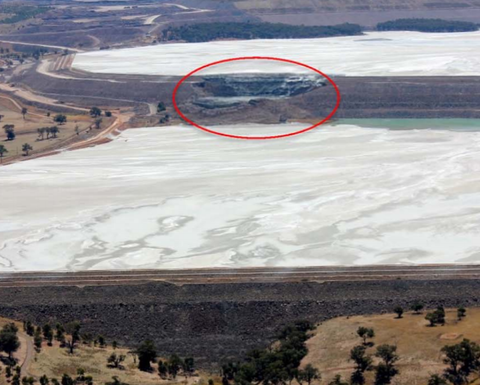 The northern and southern (forefront) tailings dams at Cadia

PRESS RELEASE: On Friday, March 9, in the late afternoon, a limited breakthrough of tailings material was identified at the Cadia northern tailings dam embankment

This breakthrough has been contained within the southern tailings dam, and Newcrest said it is monitoring the impact carefully and has observed no environmental damage. There were no injuries as a result of the event.

An area of the embankment slumped late on the Friday, following the identification of cracks earlier in the day in the dam wall during a regular inspection. When such cracks were noticed, the site team quickly engaged an independent geotechnical consultant to assist Newcrest’s geotechnical engineers at Cadia with an inspection and preliminary assessment of the embankment.

As a precaution Newcrest stopped depositing tailings into both dams late in the day of March 9. To allow site management to focus on the evaluation of the event and remediation plans, Newcrest progressively suspended all mining and processing operations at Cadia, fully effective on the next day.

The area around the tailings dam has been secured, and a comprehensive geotechnical monitoring system has been implemented, involving radar and cameras, to allow real-time assessment of ground movement of the dam wall. No further movement of the wall has been detected since Friday night.

The NSW regulators were notified, and Newcrest stated it will work closely with them until the review is completed, supported by independent geotechnical consultants.

Newcrest has been engaging local landholders and residents downstream of the tailings facility, keeping them informed about the situation.

The tailings material is a slurry of finely ground rock, water and a low level of benign processing reagents, the company confirmed.

Cadia uses a gravity circuit to recover gold, with the remaining gold and copper reporting to a concentrate which is exported to copper smelters. The mine does not use a chemical reduction process to recover gold – that is, the gold extraction process does not involve the use of substances such as mercury, cyanide and arsenic.

Geotechnical analysis has commenced on possible repair options of the failure zone. Work has also commenced on multiple recovery scenarios including alternative tailings locations such as the old Cadia Hill open pit, which is already the subject of a prefeasibility study to assess suitability for tailings disposal.

The government has pledged to prohibit mining activities at the plant.