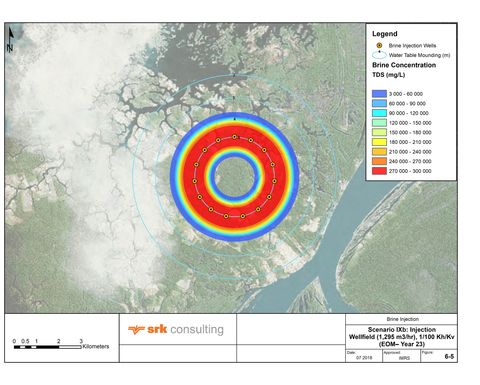 PRESS RELEASE: According to Sheila Imrie, SRK principal hydrogeologist and specialist groundwater numerical modeller, the management of waste brines is a common challenge for mines worldwide. The client in South America is investigating the options for disposing of sodium chloride (NaCl) brine over a 23‑year mine life and potentially after closure.

"A number of brine management options were evaluated for the project to consider at pre-feasibility stage," said Imrie, "all of which had to take into account the relevant environmental regulations in conjunction with the geological setting and other conditions in the mining area."

These included brine evaporation in surface ponds or in a brine concentrator, or discharging brine into surface water. Surface evaporation was considered unfeasible owing to the climatic water surplus of the region, while a brine concentrator would incur the excessive cost of a necessary lengthy high-voltage power transmission line. In any event, the subsequent disposal of concentrated brine would still need to be managed.

Discharging to surface water, while practised in other jurisdictions, was not favoured for this project despite the high natural attenuation potential in the region's rivers.

"Brine injection to surface infiltration basins was also considered, but did not appear feasible due to an increased potential for affecting shallow groundwater resources - and potentially surface water - in the vicinity of the infiltration ponds," Imrie said.

The option deemed the most practical - and evaluated further through reviewing available information, field testing and numerical groundwater modelling - was the injection of brine to a deep aquifer using injection wells.

The solids discharged from the horizontal belt filter will be conveyed to the tailings management area (TMA) developed over the life of the mine and through the post-closure period. Some of the tailings are sent underground and used as backfill in mined out panel rooms while the rest of the tailings are stored in two tailings facilities on surface and upon settling of the solid material the resultant brine needs to be removed and disposed from the tailings dam.

Situated on plastic and clay composite liners, the tailings would consist largely of waste sodium-chloride salt, with some impurities such as other salts, sand, silt and clay.

Rainfall would progressively dissolve the salt, leaving a small residue of insoluble material. Brine generated through this process and from the recycling of brine from the process plant would collect in lined settling ponds at the base of each TMA.

"The potential options for managing waste brines depend very much on having the right geology and hydrogeology," noted Imrie. "In this project area, these particular aquifer conditions - where there is sufficiently low permeability near the surface and higher permeability with depth - allowed us to identify an aquifer about 400 metres deep that has the potential to be a good injection site."

While quite unusual, these conditions presented a good opportunity for further study, to ensure that vertical movement of the brine would be limited. This would allow the brine to attenuate horizontally over time without finding its way to groundwater receptors.

A preliminary evaluation of brine injection feasibility - in line with the early-stage evaluation of the project as a whole - was undertaken through a combination of numerical groundwater and geochemical modelling. While the groundwater modelling evaluated the likely pressure increases and brine plume migration associated with injection, the geochemical modelling focused on the potential for chemical precipitation resulting from the interaction of oxygenated brine with anoxic brackish groundwater - as this could potentially clog the aquifer and injection wells.

"I was appointed to assist with the pre-feasibility numerical groundwater modelling scenarios to simulate potential impact of multiple injection wellfield designs," explained Imrie. "We developed a two-dimensional, axisymmetric radial groundwater flow model to evaluate pressure effects and plume migration - as the hydrostratigraphy was relatively horizontal and homogeneous - and to model density-driven groundwater flow. We evaluated numerous brine injection scenarios, and a range of sensitivity analyses were undertaken to help address inherent uncertainty in the knowledge of hydrogeological conditions."

The next stage of investigation, she confirmed, will include follow-up drilling, installation of test wells, piezometric monitoring and hydraulic testing to confirm the injection horizon continuity and hydraulic characteristics.

The installation of deep, nested vibrating-wire piezometers to provide reliable piezometric head profiles will also be necessary, as will the optimisation of the injection field design - including monitoring points and programme details based on outcomes of the investigations.

"This will allow the remodelling of expected pressure response and brine migration on the basis of the updated information," Imrie said. "Numerical groundwater models are essential tools for investigating the behaviour of aquifer systems in time and space. By ensuring that each phase of model development is appropriately designed to meet current project objectives, we provide our clients with a cost-effective and defensible means to evaluate system responses and potential impacts of current and future groundwater-related management options under consideration."