ArcelorMittal, which last week confirmed it was responsible for a chemical spill of cyanide near its Burns Harbor complex into a tributary near Lake Michigan, released its findings Wednesday that indicate “zero to barely detectable traces” of both cyanide and ammonia at the site in Indiana, US 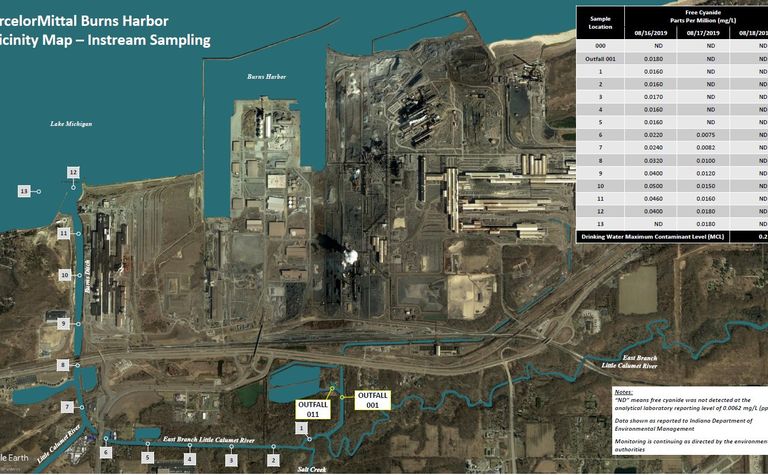 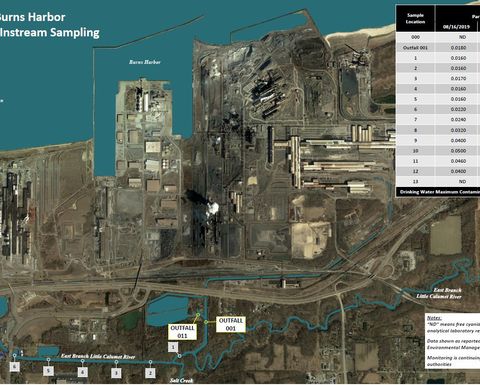 ArelorMittal explained their findings from August 18 via an overview map

In a statement provided to MM, the mining company said it sampled water at 15 locations around the spill location, and it planned updated sampling for ammonia again on August 21 once lab results were available.

"However, we do not anticipate levels that would exceed permitted levels," an ArcelorMittal spokesperson said. "The situation has improved significantly, [but] our work is far from done."

An internal investigation is in process on the incident, initially discovered earlier this month, to understand the cause; this includes the failure of the blast furnace water recirculation system which ultimately resulted in the wastewater release.

"We worked cooperatively with the involved agencies from the onset of the issue and notified the agencies as soon as we received preliminary results of water sampling showing abnormally elevated levels of contaminants that indicated a potential concern," the company said.

"As we move forward, we are committed to restoring the public's trust through our actions, not just our words. We will continue ongoing dialogue with agencies and stakeholders and water sampling efforts in accordance with IDEM's requirements [and] will refocus…efforts on environmental compliance and implement policies and procedures to prevent this from happening again.

The pellets processed at the site originated from the Minorca iron ore mine in Virginia. That operation produces about 2.8 million short tons yearly of fluxed iron-bearing pellets.

The company first said August 15 that it had found levels of cyanide and ammonia in a local waterway near its Burns Harbor plant that exceeded permitted levels.