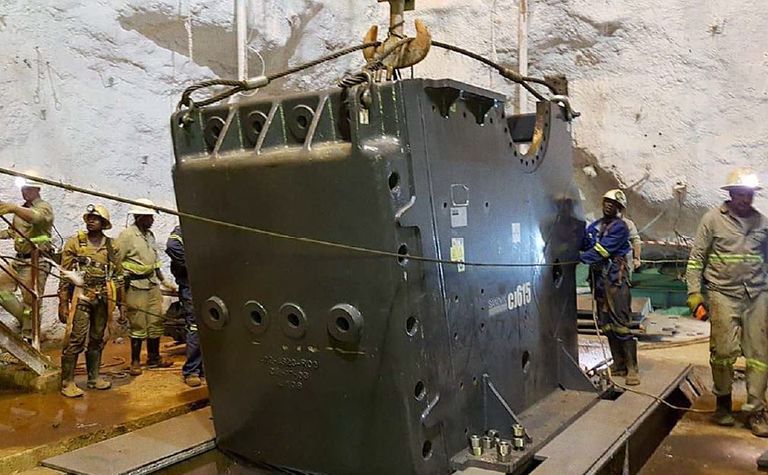 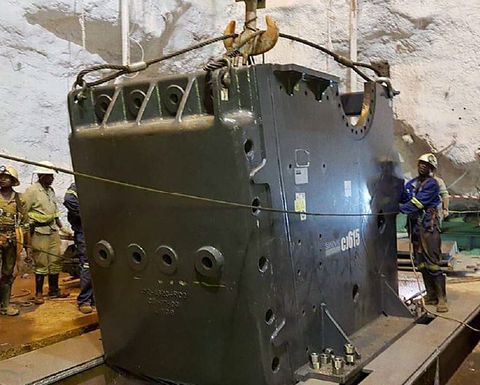 The main frame of the new underground rock crusher secured onto the base plate at the 1,150m level, ready for reassembly and commissioning

PRESS RELEASE: A large-capacity rock crusher now has been successfully installed 1,150m below surface at the upgraded Kipushi mine. The Sandvik jaw crusher has a maximum capacity of 1,085t/h. After the 54t machine was disassembled on surface, the pieces were lowered down Kipushi's main production shaft - Shaft 5 - and installed in the crusher chamber. Reassembly of the crusher is underway and commissioning is expected to begin in June.

Robert Friedland, executive chairman of Ivanhoe Mines, said: "The installation of the massive new rock crusher at the bottom of Shaft 5 is a noteworthy engineering accomplishment. It marks the final, major underground infrastructure upgrading project needed to resume underground mining, crushing and hoisting operations at Kipushi."

"Since acquiring our 68% interest in the Kipushi Project in 2011, our team has worked with Gécamines to achieve our shared objective of resuming commercial production," added Friedland. "In parallel with ongoing mine upgrading work and completion of the definitive feasibility study, we are evaluating a number of proposals we have received to fund the remaining infrastructure construction."

The Kipushi mine is owned by Kipushi Corp (KICO), a joint venture between Ivanhoe Mines (68%) and Gécamines (32%). Kipushi is on the Central African Copperbelt in the province of Haut-Katanga, approximately 30km southwest of the provincial capital of Lubumbashi and less than 1km from the international border with Zambia.

The mine was placed on care and maintenance in 1993 due to a combination of economic and political factors. The planned restoration of production at Kipushi is based on initial mining that will be focused on the Big Zinc deposit, which is approximately 1,250m below surface and adjacent to the producing Fault Zone. No mining ever has been conducted on the Big Zinc's mineral resources.

Excellent progress has reportedly been made by KICO in modernising the Kipushi mine's underground infrastructure as part of preparations for the mine to resume commercial production. With the underground upgrading programme nearing completion, KICO's focus now will shift to modernising and upgrading Kipushi's surface infrastructure to handle and process Kipushi's high-grade zinc and copper resources.

The current mine redevelopment plan has a construction period of less than two years, with a life-of-mine average annual production rate of 225,000t of zinc and cash costs of US$0.48/lb of zinc over an 11-year initial mine life.

Sandvik is crushing it