Yanfolila: on time, on budget and nearly ready for action 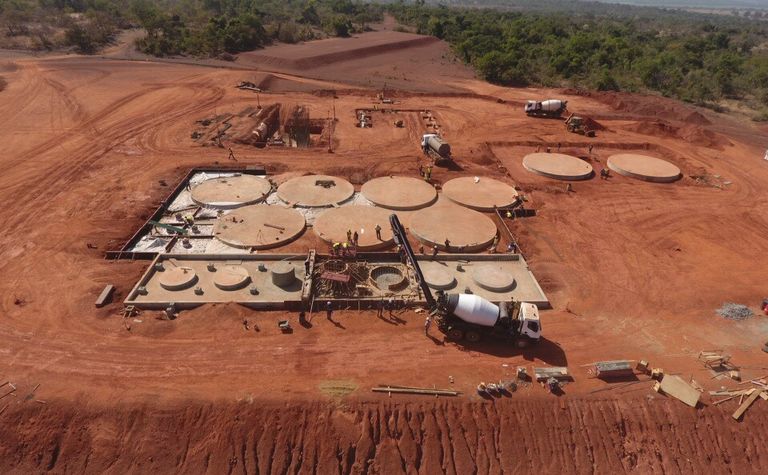 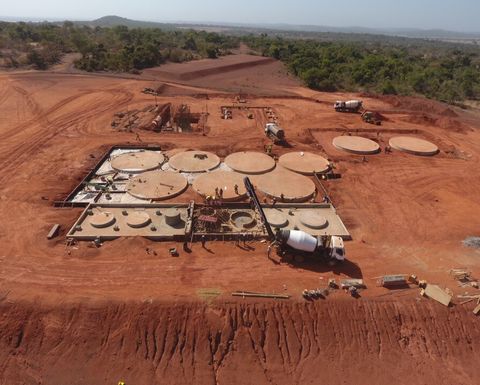 The Yanfolila gold project is based in southwest Mali. Originally owned by Randgold, the project went through a number of hands, including Gold Fields’, before it was purchased by Hummingbird Resources in 2014. Now at the construction and engineering phase, work is progressing well on site.

“Goldfields owned the project for, give or take, four years, and they spent in the region of US$100 million developing the project,” Robert Monro, Hummingbird’s head of business development, told me in an interview at the end of March. “When we acquired the project, it had a total inventory of 2Moz of gold at about 2.5g/t. They’d also put in a lot of infrastructure, including a camp and access roads, and Gold Fields also had a very well-engaged CSR [corporate social responsibility] programme.

“For the stage of project it was at, which was feasibility, it was a very advanced project.”

Hummingbird acquired the project through a tender process. “The project ultimately wasn’t big enough for Gold Fields to mobilise into a new country and build a mine,” Monro explained. “I think they need somewhere in the region of 10 years of reserve life and over 200,000oz/y production. So while the project is extremely robust – we’ve got reserves in excess of 3g/t in open pits, which is very profitable – ultimately, the scale just wasn’t there for Gold Fields. The opportunity presented itself to us and we were the fortunate winners of the tender.”

Founded in 2005 as a Liberian gold explorer, Hummingbird spent five years as a private company, exploring in the jungle in Liberia. “We’ve made a discovery there,” Monro told me. “The Dugbe gold project at the time of [our] IPO was around 800,000oz of gold. We then continued exploring and developing that and it now sits at 4.2Moz of gold. It’s a large open-pit gold project in Liberia. We have two major assets with 6.4Moz of gold in total, with Mali as our primary focus right now.”

Overall, Yanfolila is currently around 50% complete and there are some nice time lapse videos on the Hummingbird website for the earthworks geeks among us.

“We’re currently erecting the CIL [carbon-in-leach] tanks,” said Monro. “All of the civil foundation work – the reinforced concrete and foundations for the process plant – are complete. We’re now at the stage of putting up the steel and finishing the civil work.

“The crushing circuit is starting to be prepared and it’s all going well. Everyone’s geared towards completion of the process plant in Q4 [the December quarter] of this year, and then commissioning and first gold pour before year-end. We’re on time and on budget at the moment.”

Hosted by Birimian volcano-sedimentary rocks, the orebody at Yanfolila offers relatively easy access for open-pit mining and the potential to extend at depth with an eventual underground operation.

Phase one and two of the project are expected to last around eight years, with five open pits yielding 1.2Mt/y of ore for 770,000oz of gold in total. Phase three, which will begin development conceptually in year six (2022), offers a further 170,000oz of gold from three open pits and is expected to increase the life of mine well over 10 years. The company anticipates bringing forward phase three in the mine programme through the high-grade Gonka deposit, which is currently at scoping study but sits only 5km south of the plant.

The pits will feed a 1.24Mt/y processing plant located on site. The concentrator, which is costing Hummingbird US$79 million, will utilise a simple gravity and CIL-based flowsheet (no refractory ore here) with a ball mill supplied by Outotec, and a final recovery of 92.8% gold. 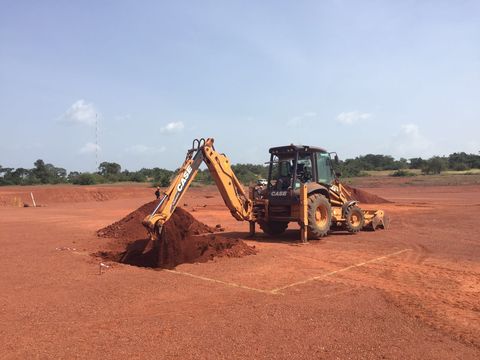 “The gold has got good metallurgical competency; around a third of the gold will be liberated through the gravity circuit, and then the rest will be recovered through CIL,” explained Monro.

In January, Hummingbird engaged African Mining Services, a subsidiary of Ausdrill, as the contract miner for the project. The two companies have a three-year US$112 million agreement, with the option to extend for a further year if necessary.

“AMS has a number of mining contracts across Mali and West Africa. They will be mobilising to site in the next couple of months, and they’ll be starting work initially on the tailings storage facility (TSF) with instruction from Golder Associates,” said Monro. “Pre-production mining is due to start in August of this year; that’s something that is very important to us. I think we’ve learnt from other people’s experience; you don’t want to leave yourself up against it at the other end. Building up good levels of stockpiles in advance of all production is important.”

AMS will bring with it a mobile fleet of 18 Cat 777F, 100t-capacity haul trucks, plus five excavators: four Liebherr 9150s (8.5m3 buckets) and one Liebherr 9250 (15m3 bucket). “AMS will also be doing grade-control drilling ahead of mining, so they’ll have four drill rigs mobilised as well,” Monro added.

“It was a competitive tender process,” Monro explained. “We spoke to people in the market and went with Senet. It’s been a good experience.

“There were lots of people who were interested in working with us on the project. Mali is Africa’s third largest gold-producing country. There are a whole host of operating gold mines, so finding a suitable contractor was relatively straightforward.”

Monro is optimistic as to Yanfolila’s rate of progress. “Every day there’s a challenge but, fundamentally, it has been very smooth,” he said.

“I think one of the massive advantages we have is that we bought the project from Gold Fields, which had obviously done a lot of very good ground work for us and, also, it’s in Mali, which is such an established mining jurisdiction.

“Senet has worked across West Africa and also in Mali lots of times before, so their experience and knowledge in-country is excellent. Ultimately, we are building a very straightforward CIL gold-mining operation; we aren’t trying to break any boundaries or do anything that no one else has done before.”

The journey to Yanfolila from Bamako, Mali’s capital, requires a four-hour drive on tarmacked roads, and then a further hour on dirt roads, so no wacky logistics have been required to get materials and equipment to the site.

“It’s very accessible,” Monro stated. “A lot of the kit comes into Dakar or into Abidjan, and then is trucked overland to site. It’s a challenge but, today, we haven’t had any issues. Everything has been delivered on time and on schedule.”

And, of course, Gold Fields’ investment in the project’s infrastructure has also paid off.

“I guess the big win for us was probably the camp; it’s mine-quality with good communications, brick buildings, air conditioning etc. It wasn’t a tent-based exploration camp,” Monro said. “It costs a lot of money to build camps that house 100-plus people.

“Local infrastructure was in place when we inherited the project, and the biggest thing for us was really the amount of time and money Goldfields spent on not just drilling, but studies generally; they’d done over half a million metres of drilling on the project.

“Obviously just getting that database of knowledge was massive, as well as all sorts of geotechnical studies. The infrastructure of the project as a whole is well-developed.” 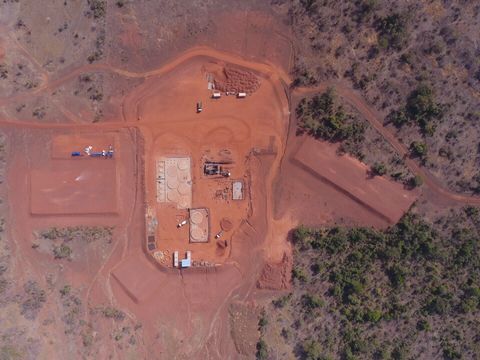 In terms of power, Yanfolila is off grid, so Hummingbird will be using diesel generators to keep operations running reliably.
“We’re in the process of appointing a power supplier,” Monro added. “We’re planning on doing a ‘plug and play’ solution as they say in the industry; so essentially, rented diesel generators. We will be the off-taker and pay a per-kilowatt price, and we’re looking to sign that agreement pretty soon with a well-known and well-regarded contractor.”

TSF construction and pre-production mining are scheduled for August, with phased commissioning of the process plant set to start in September.

Presumably, once Yanfolila has found its feet, Hummingbird can turn its attention to developing its sister gold project, Dugbe in Liberia. And what lessons will it take with it?

“They’re both open-pit, gold-mining operations, both have free milling ore with no refractory element, and both have 90% recoveries for the gold, so in that respect, they’re relatively similar,” Monro explained. “The grade at Yanfolila is higher, there’s a lot more oxide material at Yanfolila than Dugbe; Dugbe is pretty much 100% fresh rock deposit. There’s only a 3m oxide cap at Dugbe, whereas at Yanfolila there’s more like 50m or 60m of oxide material at surface, which obviously helps with keeping operating costs down in the early years.

“We’re a relatively young team, so we’re always learning, but then, equally, every project is unique and you’re guided by the outcomes of the feasibility study and what the engineers advise.”

He summarised: “We’re always looking to gain from the experience of developing any project, so I suppose we’ll just see what the end outcome is and how we can best apply that knowledge and maximise the benefit when we develop our next project.”