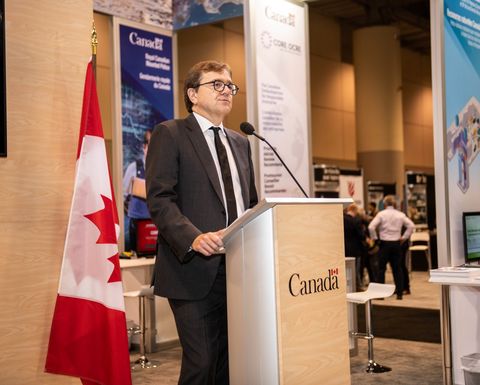 "Canada is home to almost half of listed companies in the mining and minerals space, with a combined market cap of C$520 billion, and ranks in the top five producing countries for critical minerals," Wilkinson said.

"The transition to net-zero carbon emissions is now a competitive race, and Canada's mineral wealth and critical minerals is one of our greatest advantages."

The country is home to 31 critical minerals, and contains "significant deposits" of those in greatest demand, with 13 rare earth projects being advanced.

The Canadian government signalled its commitment to developing critical minerals in an announcement that it would pledge up to C$100 million to help reduce emissions at BHP's massive Jansen mine in Saskatchewan.

The mine, which will be in production in 2027, aims to reduce emissions from mining operation by 50%.

Canada is also committed to building an end-to-end supply chain from mining to manufacturing and recycling, Wilkinson said.

"Canada cannot take 15 years to open new mines," Wilkinson said, if the country is to take advantage of the transition to a net-zero economy and provide critical minerals.

Mineral companies already in operation in Canada are investing more in existing projects to meet demand for these critical minerals.

Vale's EVP of Base Metals, Deshnee Naidoo, told the conference that the potential for expansion at Vale's Canadian operations is "high".

The mining company currently produces 50% of Canada's total nickel production at 100,000 tonnes a year, and has 16 active studies from concept to prefeasibility and execution, Naidoo said.

"We have a very strong pipeline to replace some of the tonnes, but having a 12-year history in Canada means that it comes with a high geological inflation factor," and requires going deeper with returns of lower grades.

To maintain producing 50% of Canada's nickel production, Vale has invested in an extension at Voisey's Bay, moving the mine from an open-pit operation to an underground by constructing two declines, Naidoo said.

Vale has also spent C$835 to complete the Copper Cliff South project in Sudbury, to bring mine infrastructure closer to the ore body.

The company is also considering the deepening of the Creighton mine, also in Sudbury.

It has also invested C$200 million to keep its current operations in Manitoba going, Naidoo said.

"There's an impressive resource, with some 3 million tonnes of contained nickel in the ground," Naidoo said.

Vale has also concluded its prefeasibility study for a nickel sulphate facility in Becancour, Quebec.