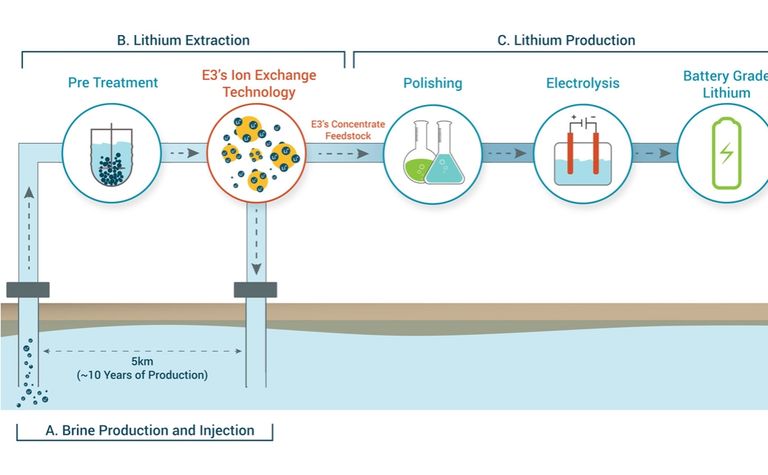 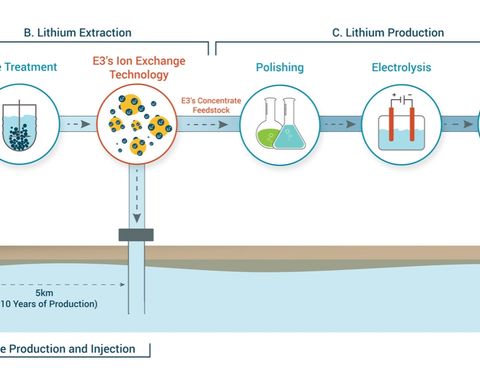 The lithium concentrate from which it obtained the hydroxide was produced with the company's ion-exchange extraction process; thus, the lab tests it has completed at the Alessi Lab at the University of Alberta have proven the process flowsheet's validity.

After brine from E3 Metals' Alberta lithium project was processed using the company's technology, the lithium concentrate was then further refined and purified by polishing processes and electrolysis into a final purified lithium solution, which was crystallised into lithium hydroxide.

The university's testing was repeated, confirming the reproducibility of the process and methodology, according to E3. Its steps to hydroxide production included pre-treatment, or removal of any oil and gas from the brine; extraction, or processing the brine with E3's proprietary lithium extraction technology; polish, where pH adjustment and removal of divalent ions using commercially available ion exchange resins are completed; electrolysis, or utilising a monovalent selective membrane cell to purify a LiOH stream; and crystallisation of LiOH∙H2O powder.

"Producing lithium hydroxide powder from brine within our Alberta lithium project is a step towards a commercially sellable product aimed directly to lithium battery manufacturers. It offers an attractive economic value potential as we advance our project," E3 president and CEO Chris Doornbos said.

"This achievement gives us a high level of confidence that we can rapidly unlock the tremendous potential of our vast Alberta lithium resource with the right production process flow sheet."

Lithium hydroxide, E3 officials pointed out, is increasing in demand and that uptick has attracted industry interest in its project and, as the project plan is validated, should enable it to secure offtake agreements that will give access to long-term lithium supply.