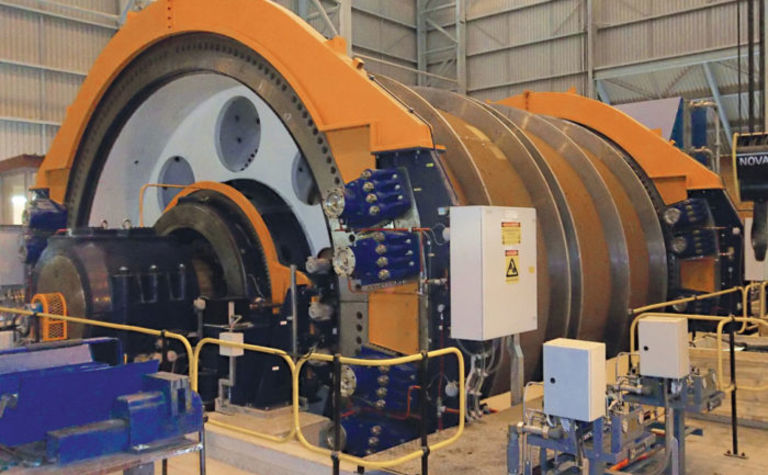 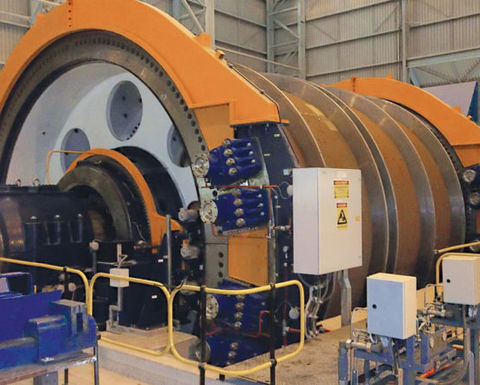 Twiflex worked with FLSmidth as well as its own South African distribution associate Tritec Sintered Products for the installation.

Twiflex said the BMR double-drum’s payload is 47.5t, and its operation capacity can hit speeds of 17.6m per second in a 1,278m-deep shaft. A FLSmidth-designed precision control system will permit synchronous braking of all brake units.

Twiflex’s brakes will be used for parking and holding each time the mine winders stop.

“In exceptional conditions (such as power failure), the brakes can be used to bring the load to rest whilst maintaining a maximum deceleration of 2.3m/s2,” the company said.

Its engineers designed a large pad version of its VMS3-SPS spring-applied, hydraulically released brake – which it provides for worldwide mine hoists – to meet the site hoists’ high rubbing speeds and also to provide greater thermal capacity.

“Known as the VMS3-VR the 16 off brakes (eight off on the fixed drum and eight off on the clutched drum) operate on two 6,800mm diameter, 70mm-thick discs, producing a total braking torque of 12.2MNm,” it added.

Twiflex’s brakes include a monitoring system to monitor brake pad wear and loss of braking force and signal as needed. The VMS3-VRs include the company’s 'parked off' feature, allowing them to be adjusted under hydraulic pressure – meaning no stored energy once pressure is removed.

Nkana is one of Africa’s largest copper and cobalt mines, with four underground operations and an open pit.