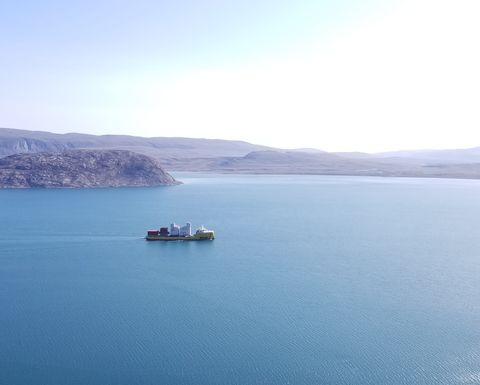 The BigLift Barentsz vessel reached the port on Baffin Island with its 5,500t freight in the beginning of August

Baffinland currently transports ore from its Mary River mine, which consists of nine high-grade iron ore deposits, over a tote road to the Milne Inlet port, located on the northern coast of Baffin Island about 100 kilometres away. The port is only free of ice and accessible to shipping between the end of July and the beginning of October.

With thyssenkrupp's system, Baffinland is hoping to triple its material-handling capacity to 12 million tonnes of iron ore per year.

Christof Brewka, head of materials handling at thyssenkrupp Industrial Solutions, said the engineering company brought together its experts from Germany, Canada and the US to help develop a suitable solution for Baffinland.

thyssenkrupp is supplying the miner with a complete system for the processing, storage and transport of iron ore. This includes a railcar unloading station, a crushing and screening plant, a stockpile system including a combined stacker/reclaimer, a ship loader, and a conveyor plant connecting all components. As part of the overall project, transportation of ore will also be converted from road to rail.

Due to the difficult logistical and climatic conditions on site, the plants are preassembled at four locations in Europe, Canada and the Middle East. The first delivery, including a crusher, a screening system and a railcar unloading station, was shipped from Bremerhaven, Germany, to Canada in July 2019.

The BigLift Barentsz vessel reached the port on Baffin Island with its 5,500t freight in the beginning of August. Two more cargo ships are scheduled to deliver conveyors during the current shipping season, while the remaining units will be delivered in 2020.

When it goes into operation in 2021, the system will crush, screen and store the ore produced in the Mary River mine all year round and load it onto Panamax or Capesize ships during the ice-free season. According to thyssenkrupp, the system can fully load a Capesize ship in just one day.

Baffinland, jointly owned by ArcelorMittal and Nunavut Iron Ore, has been producing high-quality iron ore all year round from Mary River mine since 2015.