KTI: The coolest way to mine

The underground mining environment is in constant battle against heat and humidity to deliver a workplace that is safe, and where the performance of employees and equipment is not jeopardised. It is not uncommon to encounter temperatures of close to 60C in an underground mine. 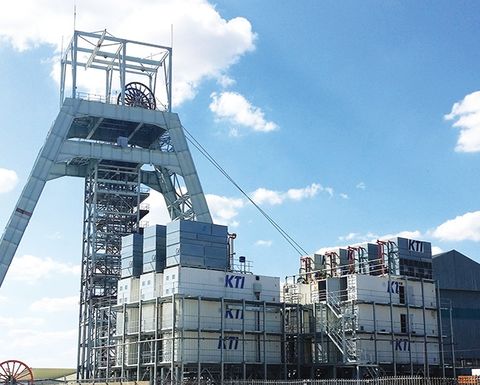 Cooling such an environment presents a huge challenge – both financially and technically. In steps KTI Global Mining, a global leader in ice-making technologies, which has successfully designed, installed and commissioned a surface plate ice plant at Harmony’s Phakisa Gold Mine.

“We are the new kids on the block in underground mine cooling, and we really want to make sure we provide solutions that will tick all the boxes with regards to our clients’ requirements.”

These are the words of Joe van Wyk, newly appointed Chief Operating Officer of KTI Global Mining, a subsidiary of KTI, based in Balzheim, Germany. KTI has just launched two new products into the mining market, complementary to its surface plate ice plants.

KTI is globally regarded as the leader in concrete cooling. The company’s world-class engineering teams, and renowned German manufacturing standards, have ensured that KTI is regarded as the go-to guys in the concrete cooling domain since 1986. KTI  can claim that it has been a key part of the construction of some of the most iconic building projects in the Middle East.

KTI ice plants are modular in their design and operation and this is one of the main reasons why Harmony’s Phakisa Gold Mine management in South Africa considered KTI as the solution to complement their existing underground cooling solution.

Cooling a deep one

The managers decided on KTI’s modular plate ice plant system. Initially, two ice plants with 200 tons of ice per day capacity each were constructed in Balzheim, Germany. These were then shipped to Cape Town as containerised systems, and against all odds, they were installed and operational within 10 days. Subsequently, another four containerised units were installed, and the KTI surface plate ice plant has been running 24/7 at a capacity of 1,200 tons of ice per day.

KTI’s surface plate ice plants are now complemented by the introduction of an underground version, with a production capacity of 80 tons of ice per day. These underground units are also manufactured in Balzheim, Germany, and are easily transportable and relocatable. They have been designed to fit easily down a mine shaft. The Underground Plate Ice Plants, or UP80’s, come in two modules – a refrigeration unit, and a plate ice unit. These units can be assembled in four different arrays, depending on the underground space available.

Mining, on a global scale, has continuously been challenged by three factors  in recent history: cost saving, improved efficiency and environmental responsibility. As more and more ore deposits “open up” down at depth, through improved underground mining methods, a need for more innovative supporting processes, such as mine cooling, also increases.

Two main factors contribute to heat at depth in underground operations: the inherent geothermal gradient, or latent heat of the rock mass, as well as operational heat generation within stopes. Delivering an ambient working temperature is a prerequisite for any underground operation.

In addition to the Surface and Underground Plate Ice Plants on offer, KTI has also launched its new Underground 1 Megawatt Water Chiller – the UC1000.

KTI answered a need expressed by various potential customers, delivering a product that will solve many problems regarding getting “coolth” where it is needed most – the rock face. These units, just like the underground plate ice plants, are mobile – therefore easily relocatable to serve its purpose where needed as underground development progresses. Special care was taken in the design of the underground products, assuming high water fouling factors, robust and corrosion-free materials to handle the rough underground environment and the use of Freon – a human friendly refrigerant.

“Although it is not essential, the UC1000’s will work best in conjunction with our surface or underground ice plants”, says Van Wyk. “Water at around 17°C can be received  by the UC1000 from a consumer, after the consumer has received 4°C water from an ice silo or dam. This 17°C water can then be brought back down again to 4°C by the UC1000 for final use by, for example, a cooling cart,” adds Van Wyk.

Mr Andreas Eyd, General Manager of KTI, makes a point of the effort his team has put in to come up with products that truly serve their purpose. “We have asked questions, and we have listened very carefully. I believe we have a suite of surface and underground cooling solutions that will change the way things have been done historically in this domain.

“One of the big advantages of KTI systems is their modularity in nature – you just add capacity as you go along – avoiding massive capital layouts at early stages of project development. One thing we will always be clear on: we will never compromise on materials and manufacturing process quality. This is even more applicable to the underground mining domain. We literally have people’s lives in our hands, and we will make sure they think of KTI as the coolest guys in mining!”