Miners and conservationists come together in Nevada 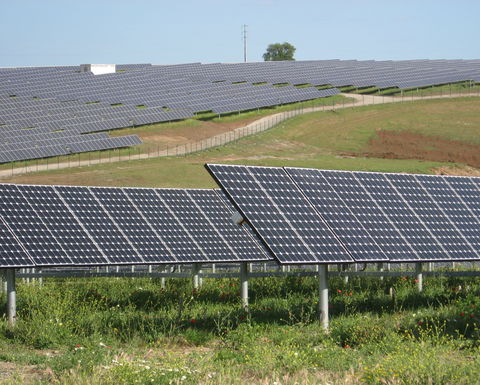 Every six acres (2.4ha) of solar panels can generate 1MW of energy each year

PRESS RELEASE: Mining companies, renewable energy developers and conservationists aren't likely to be the first groups to come to mind for most people when they think of partnerships in Nevada, US.

However, as solar energy development heats up in Nevada, it is becoming increasingly important that choosing sites for large-scale energy facilities be done thoughtfully to minimise impacts to the state's land, water, and wildlife. A regulatory change supported by both conservationists and the Nevada Mining Association (NvMA) would lay the foundation for advancing the development of renewable energy facilities on lands that have been previously used for mining in Nevada.

John Zablocki, southern Nevada conservation director for the Nature Conservancy, works on science-guided siting of large-scale energy facilities as one strategy for protecting Nevada's environment. "Every time I'd fly across the state, I'd look down from the plane and see large areas that had been impacted by prior economic uses, like mining, landfills, sand and gravel operations, and brownfields," explained Zablocki. "I'd think to myself, ‘why not put solar development there? Or at least put as much of it as we can there. Who could argue with that?'"

To answer that question, the Nature Conservancy partnered with the University of Virginia Law School to identify what legal, financial, and other barriers might explain why development on those impacted lands wasn't happening. As a first step in addressing one of those barriers, the Nature Conservancy and NvMA jointly proposed a regulation change that adds ‘renewable energy development and storage' as a productive post-mining use of the land in NAC 510A.070. After considering it, the Nevada Department of Environmental Protection decided to include it in their recommendations to the State Environmental Commission, and the commission approved the change last week.

Zablocki commented: "What this does is make the rules absolutely clear that placing renewable energy projects on previously disturbed sites is an allowable use, making it easier for companies to explore that as an option for lands that aren't going to be used for mining anymore."

In Nevada, there are currently at least 35,000 acres (14,164ha) of closed mining lands. Every six acres (2.4ha) of solar panels can generate 1MW of energy each year, equivalent to the power needed for roughly 500 homes. The change will be heard once more later this summer for possible final adoption by the Nevada Legislative Commission.

"As one of the pre-eminent hard rock mining regions in the US and one of the sunniest states, Nevada is uniquely positioned to benefit from this regulatory change," said Dana Bennett, president of NvMA. "For many years, Nevada mining companies have carefully managed mine operations to protect and conserve environmental resources. Nevada minerals build this country's renewable energy infrastructure and now this regulation creates a new way for mines to contribute to Nevada's renewable energy future."

Re-envisioning the future for some of the lands that have been impacted by mining is a solution that supports renewable energy development, avoids environmental conflicts such as land conversion or wildlife habitat fragmentation, and supports our state's economy - especially in rural communities.