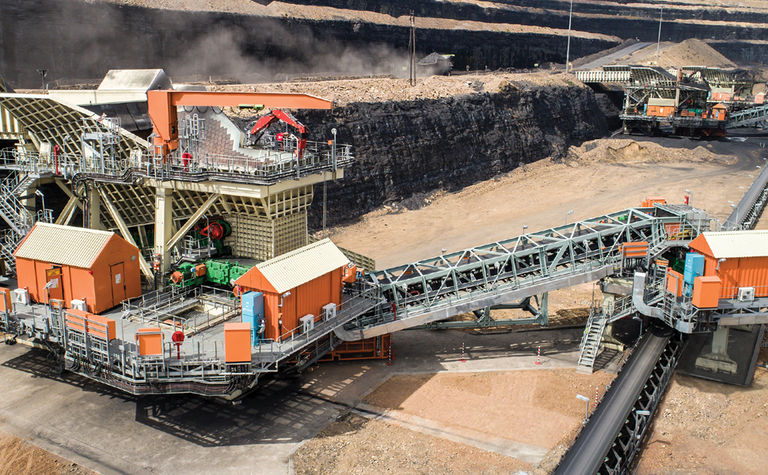 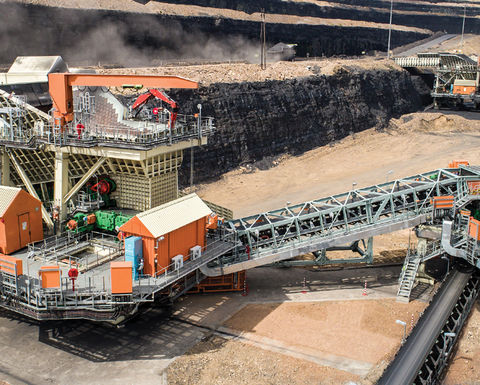 Green isn't just the colour MMD (Mining Machinery Developments) typically paints its equipment, but a reflection of a deeply held ethos: to help customers not only be more effective and efficient but also more environmentally friendly at the same time. In 2018, MMD celebrates 40 years of mining innovation, and the environmental impact of mining has never been more at the forefront of industry minds.

Mining trucks are typically the worst offenders regarding noise, dust and damaging CO2 emissions. However, breaking this haulage dependency is harder for some operators than others.

Lee Hillyer, Director of MMD Australia, commented: "Over the years, we have worked closely with customers to provide turnkey IPSC (In-Pit Sizing & Conveying) solutions. However, for a number of operators conveyor installation is often impractical, or investment in trucks has already been completed - therefore conveying isn't the answer they are looking for. Our Semi-Mobile Sizing stations work for operators in this scenario - where they recognise the need for greener thinking, but still need to utilise and maximise their truck-and-shovel investment."

It is widely known that the Australian mining sector is often prone to boom or bust. Therefore, investing wisely in the right technology or equipment is critical. While mining can be a lucrative business, the setup costs - known as capital expenditure or CAPEX - can be staggering. Start-up costs for an open-pit mine that processes up to 5,000 tonnes of ore a day can be more than $20 million USD.1 However, playing it safe and only focusing on CAPEX costs rather than carefully considering operating costs (OPEX) is something investors and operators do at great risk.

Capital costs will often include material processing equipment: either a crusher or MMD's Sizer technology. Peripheral items such as concrete and/or reinforced earth (RE) walls and building roads can run into millions of dollars.

Nearly 90% of existing mine sites in Australia have invested in or use fixed plant solutions. However this mindset is based on historic thinking, where trucks were used to "bridge the gap" of any distances or cope with issues as the mine progressed or expanded.

A clear solution to reduce OPEX costs and daily environmental impact is the deployment of MMD's Semi-Mobile Sizer Stations - which offer the same functionality as a permanent plant, but without many of the associated installation costs.

The fundamental thinking behind our approach is that the closer the material processing plant is to the extraction site, the better. Transport costs for moving high volumes of material with a large truck fleet can be staggering, taking into account fuel, maintenance and labour costs. By using Semi-Mobile stations, trucks hauling material do not have to travel so far between the mine face and Sizer unit. This means that less fuel is consumed and there is less wear and tear, which in turn leads to decreasing maintenance costs. In contrast, with a fixed plant setup, as haulage distances increase, more and more trucks are required to maintain production levels over the haulage route. The more trucks and manpower onsite, the greater the risk of safety incidents likely occurring.

The benefits of short-haul truck and shovel thus become self-evident. 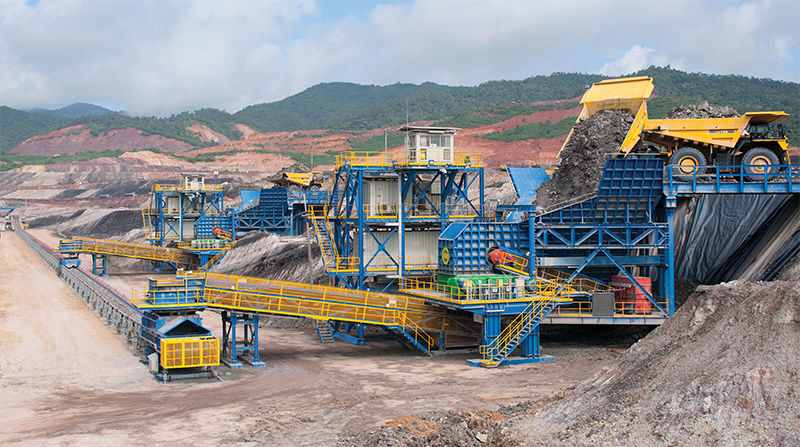 Concrete or reinforced earth walls - typically required for fixed plant installation - can cost anywhere from hundreds of thousands of dollars to millions, depending on the scale of the operation. What's more, they take time to establish and require a lot of natural resources to complete. In contrast, the Semi-Mobile Sizer Stations are designed to work with fabricated twin or single truck bridges or natural in-ground hoppers, which are much more cost-effective. Rather than positioning the plant away from the bench, the truck bridges can be either tied into or adjacent to the bench, thus simplifying installation.

As the mine continues to develop, the Sizer stations with bridges can easily be relocated to different areas to limit the overall haulage distances and minimise infrastructure costs.

Labour costs can also be minimised utilising MMD's equipment. While some mining companies might prefer to have one operator onsite, each station can be fully automated, so there is no requirement for a permanent presence. 24/7 wireless monitoring via the latest onboard telemetry and CCTV alerts staff to any issues remotely, so maintenance crews can be sent in to deal with problems when they arise instead of being stationed onsite on the off-chance that an issue might occur. Meanwhile, condition-based monitoring ensures that the equipment is operating at optimum efficiency and maximum capacity. The sensors will give forewarning of any maintenance needed to minimise the likelihood of unplanned downtime.

A final consideration with fixed plant installations is that once the mine has reached the end of its life, federal and state laws require owners to return the site to as close to its original condition as possible, with plants, trees, dirt and other stipulations as agreed. These often-overlooked costs can run into tens of millions of dollars. Therefore, using mobile plant offers a huge benefit over the life-of-mine as there is no requirement for walls, roads and services to be removed and earth to be landscaped. When the time is up, mobile plant can easily be relocated in modular form or decommissioned. MMD's Stations leave a smaller environmental footprint as there is no need for plant breakdown, crushing and disposal of slabs and concrete, or large fleets of trucks to take equipment away and landscape. In short, our Semi-Mobile structures are simply not in place long enough to cause such a permanent impact as fixed installations.

"rehabilitation of the site could cost somewhere in the region of $439 million… six times the original estimate."2 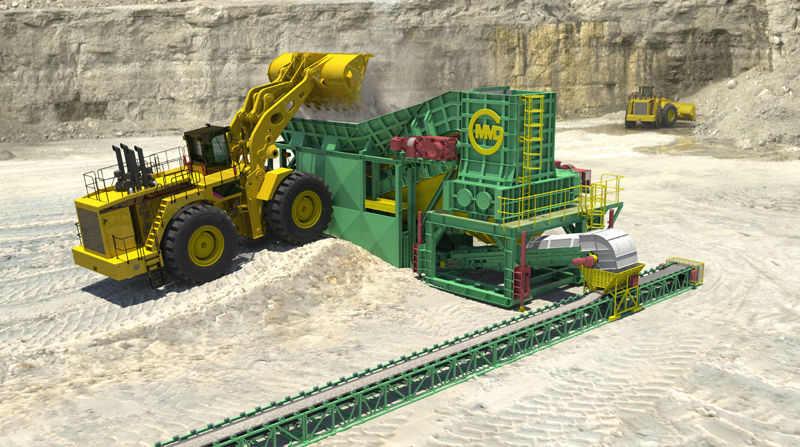 It is not only the larger Semi-Mobile Sizing stations that generate so much industry interest. Smaller skid mounted units deployed in the last few years in the USA and Southeast Asia have also achieved significant impact. "Going ‘small' does not mean a drastic reduction in production - it's all about feeding the stations consistently to sustain higher tonnages," says Lee Hillyer. Smaller and mid-size stations can be fed by haulage trucks or front-end loaders, without the need to invest in expensive shovels or large truck fleets (with their associated running costs). Front-end loaders offer a greater degree of control during handling, and they can deposit material directly into the station's hopper, which is located at an accessible level. Smaller MMD units also have even smaller footprints, allowing them to be located almost anywhere accessible by equipment within the mine - even to be placed in tight or difficult-to-reach corners.

If the overall life of mine is not long, a smaller unit will offer similar benefits to the larger semi-mobiles but with much more favourable ROI figures. Smaller units can be much more easily relocated, redeployed or even considered for underground deployment at another site. With physical overall ‘size' a distinct advantage, the units are also more likely to be scheduled or considered for more frequent relocation by mine operators. Efficient relocations minimise loading cycle times, which is a major factor in maximising throughput and overall production. A smaller unit moved more often, could offer almost offer the same benefit as a large unit moved less frequently. 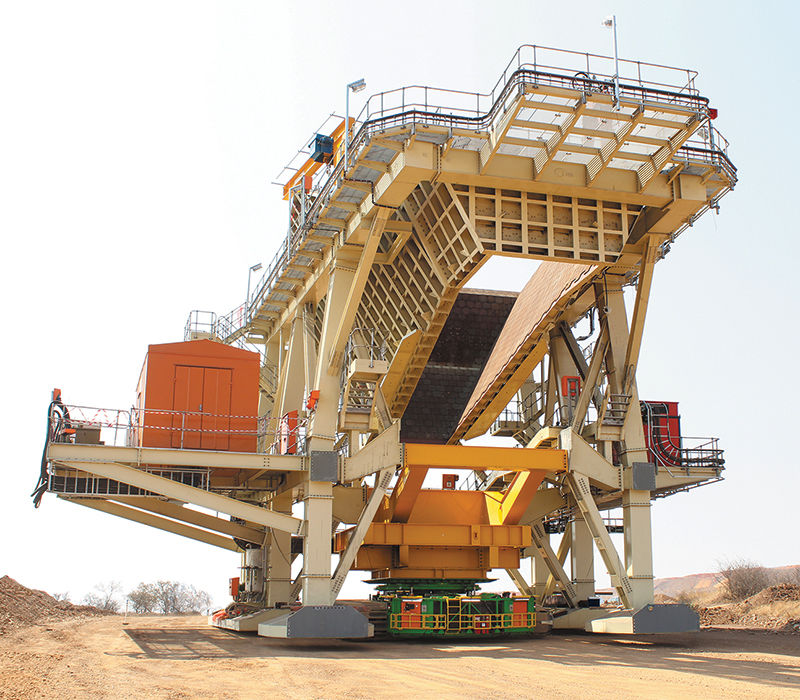 MMD's Semi-Mobile Sizer Station can be easily relocated around the mine with the versatile Atlas 500T transporter. A single transporter can serve multiple units and equipment within the mine, relocating machinery in a safe and controlled manner. Equally, sections can be lifted and rotated at any height for optimum travel, independent of the crawlers. Utilising more than 80 sensors, the transporter has the capability to monitor and maintain the payload's centre of gravity automatically while travelling over different terrain and gradients. Inline and cross gradients of up to 8-10% can be accommodated, providing uncompromised portability. For safe operation, the transporter is controlled by a fully-featured remote control wireless unit that provides live feedback and maximum control while travelling, lifting or slewing.

Overall, whilst mining is an expensive business, when it comes to processing plant and its associated costs returns can be greatly improved through careful equipment selection. As lucrative deposits become harder to access, a Semi-Mobile Sizer Station can not only operate in hard-to-access sites but can potentially save a mining operator millions of dollars in costs over the life of the mine.

As Lee Hillyer comments, "The benefits of Semi-Mobile Sizing stations only have to be seen once to be believed - a common-sense solution from MMD to reduce costs and environmental impact."